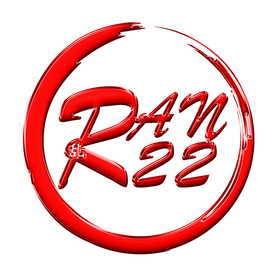 ​The Hype
Ran22 has one rule when it comes to writing - nothing is off the table. Band members are all seasoned pros with lots of stage and studio experience and, quite frankly, are just having fun bringing all those influences and experiences into one big, unmistakable, pot. If you like your music conveniently squashed into a particular genre then this is not the band for you.  On the other hand, if you're a bit more broad minded then you really should check it out.
Who's Who?
Not that it matters really; surely we listen to music we like, not people? Anyway, it's natural to be curious about who's tickling our musical tastebuds so here's a quick personnel low down.

In the engine room.
That would be Robin (Rob) on drums, percussion and backing vocals. He's also the studio manager and makes fantastic tea! His biscuit tin stocking skills are second to none. Seriously, Robin is massively influential in the way the band sounds thanks to his diverse musical background. He's a human metronome but he can twist any given groove into something fresh, which keeps everybody else on their toes. Bloody nice bloke too (how Bristish is that?).

Bass playing duties are down to Dave (see "Planks" etc) when the band's in the studio, but that presents some obvious problems for gigs. Ran22 has a short list of preferred bass players for gigs so keep and eye on the news pages to find out who's rumbling out the low tones & when.

Ivories / Vocals
Ladies and gentlemen, I present Robbie (Robbie - to prevent confusing him with Rob). A prolific songwriter with a gift for observation and perspective. Robbie has, how can we put it, a dark sense of humor (ok, sometimes it's plain twisted), which often infiltrates his lyrics. Like the rest of the band, Robbie's playing CV is longer than Aunt Maud's beard, so he knows how to "let go" and just when to do it too.

Planks / Vocals
Our Dave (Dave - to avoid confusing him with Rob or Robbie) does all the "things with strings" in the studio and flatly refuses to play anything other than guitar (and the fool! - R&R) on stage.  He also does the button pushing and fader sliding in the studio.  Dave is a huge Blues  fan (a constant source of amusement for R&R) , Jazz (more amusement) and Rock fan but his influences encompass  a much more eclectic field.
Why "Ran22"?
Only the band & a handful of close friends know the answer to that one. However, they thought it would be fun to let you offer up some ideas of your own. Contact us (see the "Contact" page) and let us know what "Ran22" means to you, or what you think it might mean to the band. There are prizes (really - proper prizes) for the closest guesses and we'll post the best & most amusing on the "News" page.